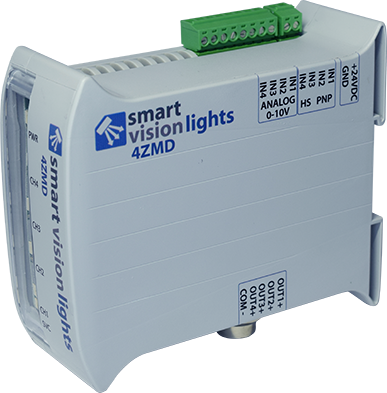 The 4ZMD permits control of up to four separate light zones either independently or simultaneously, in any combination. The 4ZMD is designed primarily for use with photometric 3D systems and large multilight configurations that determine localized 3D information or inspect large areas, such as vehicle undercarriages. The 4ZMD can also control smaller lights, such as multi-zone ring lights. The 4ZMD is typically used with SVL’s new programmable LED Light Manager (LLM).

The 4ZMD and the 4WMD are equipped with a 5-pin reverse-key M12 quick connect and a four-channel output screw terminal block. Both are equipped with digital/analog input channel screw terminal blocks and are DIN rail mountable. Both drivers incorporate SVL’s SafeStrobe™ technology, providing OverDrive™ protection to ensure that high-intensity LEDs are not damaged by being pushed beyond their maximum strobe times or duty cycles.